Exploring Calvin and Hobbes is the companion book to a show at the Billy Ireland Cartoon Library and Museum at Ohio State University which celebrates the popular comic strip created by Bill Watterson from 1985-1995.

The cartoon strip features six-year-old Calvin and his stuffed tiger, Hobbes. Named after the 16th-century theologian, Calvin is a boy with a vivid imagination, an aversion to homework, chores, and girls. He taunts his mother ('Prepare for annihilation, pitiful Earth female), torments his classmate with descriptions of his 'thermos full of phlegm'  and keeps a sign on his bedroom door that reads 'Enter and die'. Despite Calvin's lack of George Clooney suaveness, millions have fallen in love with him and his tiger companion. 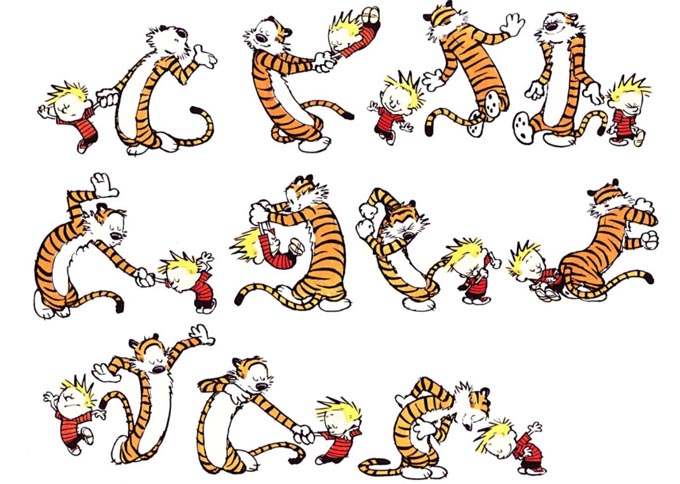 On its simplest level, the cartoon was about the friendship between Calvin and Hobbes. It also explored the richness of the imagination and the subversiveness of creativity - a theme reinforced by Watterson's practice of drawing Calvin’s flights of fancy in photo-real detail.

Alongside finished Calvin strips, the catalogue also includes examples of Watterson’s early work including self-caricatures from Watterson’s student days; strips that influenced him and an extended, candid interview with Watterson which looks at his inspirations, the development of the strip and his decision to end the strip in 1995.

Watterson drew much of his inspiration from other comic strips: 'Peanuts was one big, long cartooning class for me..it largely defined my idea of what a comic strip should be: funny, beautifully drawn, expressive, and intelligent'. Another important influence was Herriman’s Krazy Kat, a strip that made him 'more attentive to the use of language, timing, and space—the ‘poetry’ of it all.'

After a short stint as a political cartoonist, Watterson began exploring ideas for comic strips. Calvin and Hobbes began as minor characters in another strip. An editor at King Features paid Watterson $1,000 to develop them, only to reject the finished strip. Fortunately, Universal picked it up.

At the height of its popularity, Calvin and Hobbes appeared in 2,400 newspapers worldwide and over 30 million copies of Calvin and Hobbes books were sold. In 1986 and 1988, Watterson won the National Cartoonists Society’s prestigious Reuben Award for Outstanding Cartoonist of the Year. The cartoon strip was recently described by the Wall Street Journal as 'the funniest, the most touching and the most profound American cartoon strip'.

In 1995 Watterson announced his decision to end the strip, explaining his reasons for doing so:

'By the end, I felt I’d reached the top of the mountain,the strip was as close to my vision for it as I was capable of doing. I was happy with what I had achieved, and the strip’s world seemed complete. ...Art has to keep moving and discovering to stay alive, and increasingly I felt the new territory was elsewhere'

And so, on 31 December of 1995, the final strip of Calvin and Hobbes was published, showing the duo tobogganing into the forest to seek new adventures, reminding us once again, that we live in a world full of magic, adventure and possibility.

Find out more about this much loved cartoon strip with a copy of the beautiful Exploring Calvin and Hobbes.